We were on once more for a crazy party, and this time, cozplay ruled the scene! Thanks for everyone who joined: threepwood, nop, mattie, kassz, myst, snowy, gloozy, mathilya, roof, julia, alex, chevi, and kuro.

We kicked off at Richards Majestic Film Studio, where all participants showed off their crazy costumes. The costumes were so awesome, that police arrived and held their breath with an astonishment. After a voting contest (and some totally accidental ahum explosions too!) we elected the winners: threep and kassz. Congratulations both! 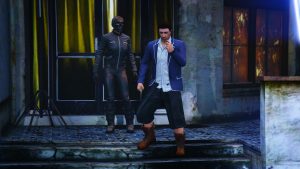 In the playlist, we started with famous angry birds capture. Unfortunately, thanks to a glitch, we failed to emerge winner team so after a quick disconnection we moved on. Next, we raced in my drift race, in which roof managed to win, ahead of creator and mattie. After this, we battled in deliver-the-case versus mission, where myst took a case and impressively delivered as quick as possible, (almost!) without any victims. Kassz’s beach race followed, won by roof again. Special mention to me, I finished 2nd. To last. 😉

Next up, we raced again on difficult track around Vinewood, in which roof, me, and myst had a great battle, until the end. After that, we rolled some bowls, which was fun as always, despite the unbalanced teams. We continued with another race created by me, for the first time won by its creator. Finally, we finished with a very tight parachute jump, in which 4 players managed to get maximum score of 165 points. Kassz was the fastest, and so he won this game.

Congratulations to roof for winning the playlist, with me coming second, closely followed by myst. Thanks to everyone who competed in playlist and managed to finish it!

For after party, we did some adversary modes in cozplay style: vehicle vendetta, slipstream, hunting pack (in which mattie managed to confuse everyone with his ingenious tactic!) and trading places.

As this post is already so late, instead of photo’s, this time, I’ll simply point you all to the livestream at ultra high quality on twitch!