We assembled at secluded beach in Palomino Highlands. Due to its remoteness, various vehicles appeared at the place. After specating a maginficent sunrise, it started to rain. We weren’t worried though – at the beaches near rainforests it also rains. Then, we started a unique photographic contest. All competitors had 10 minutes to make a selfie screenshot on a beach and post it on #snapmatic channel on Discord. With 8 votes Mattie and Myst won the challenge. Congratulations both! 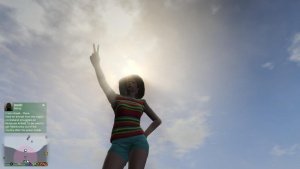 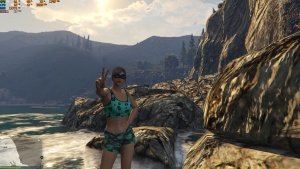 We started the playlist with Mattie’s angry pirates game, which as always abounded in many explosions and heroic runs. Next, my fresh beach deathmatch, where our boss and Roof scored most kills. Then, a race around Palomino Highlands, won by Villem. Panto football match followed, and because of lack of goals, Rockstar’s coin toss decided who won. After that, we sharpened our knifes for beach massacre deathmatch. I managed to score most kills, accompanied with pretty realistic knife stab sounds. We continued with my race around Procopio Beach, in which Myst crossed the finish line as first. Next, a classic game of sumo, and the last offroad race, won by Mattie. Finally, Villem’s reverse-truck capture, won by team consisting of job creator, Quiomi and Myst.

After 591 days, the player of the week title goes back to Mattie, who won the playlist ahead of me and Myst. Congratulations everyone for participating and making our time in GTA cheerful as always!

Mattie’s high quality party recording can be found here. Thank you again for joining and hope to see you at the next event!