We assembled where our all heist adventures started – at Lester’s garment factory. As for first activity, we raced to Fleeca Bank in our armored Kurumas. This time, Tankz was the fastest to intimidate hostages or open deposit box 167.

We practiced one of the most tricky maneuvers in this heist – parachute jump onto container from Station setup. Here, big thanks go to Threep for creating a specific job in creator which allowed us to practise this trick. After that, we tried again, but this time we jumped from the crane at the docks. And finally, we recreated a prison break with Maxim Rashkovsky. Using prison bus provided by Mattie we entered facility, but unfortunately, our cover was really weak. At least Rashkovsky was waiting for us. Escape turned out to be much harder than in the real heist – many team kills, much more aggressive cops… Somehow, half of us managed to get into the plane and escape. That didn’t work either. Because we were waiting too long for takeoff, cops damaged the plane so badly, that out of 2 engines we had, only 1/2 was working. And so, the plane crashed 500 meters after the start, thus failing the heist 🙁 The official reason is shown below:

Being upset after our epic fail, we called one of the most characteristic helicopters used in Humane Labs – Valkyrie. In order to unload our anger, we completed 3 gang attacks using these aircrafts. Thanks to that experiment we concluded, that freemode Valkyries are made of paper, as we needed 6 of them for three gang attacks. Nevertheless, it was fun. To end this, we spectated beautiful sunrise at the beach near Humane Labs and dived towards the cooling tunnel. No surprise, the grate was still present.

We started with recreation of Trash Truck setup – a Trashmaster capture around south Los Santos created by event’s host. Many bags of molly were delivered. Next up, we had to deliver all the product to El Gordo Lighthouse, like in finale. We called our fanciest trucks, as well as Vigilantes in order to make trucks go faster. After many crashes, hilarious bumps, we all arrived, so Trevor could become a very rich man.

Sadly, Avi Schwartzman called me just before we decided to pay him a visit. He stated that the police finally arrested him and clamied that he did not eat any squirrels. And so, we moved straight to the final. Who needs transmitters anyways. For that purpose I created a job which recreated escape route from Pacific Standard on foot, bike and a parachute jump to Lester. I raised a TrumpWall fence, which blocked off almost 25% of the State of San Andreas. The escape turned out to be harder than in the original heist (no surprise, really…) but after 12 mintues of action like in movie “Heat”, 4 bags of money were delivered to Lester, and we could finally take part in Lester’s infamous picnic.

After enjoyable skinny-dipping with Lester, we came back to the place where we assembled and recreated the very final cutscene, where we all stand on the roof of Lester’s place and drink some beers. For after-party, we tested one of Backblast’s races and tried some wall glitches.

I’d like to thank everybody who joined and made this crew event enjoyable, even without classic features, such as outfit-voting contest and playlist. At this point, special thanks go to Villem from providing pictures below. And of course, to Mattie for recording the party – it can be found here. See you on next crew events. 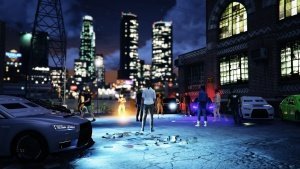 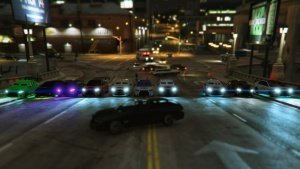 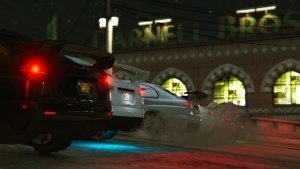 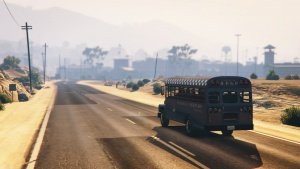 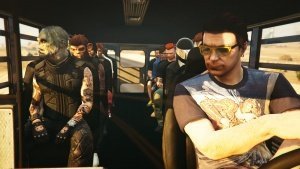 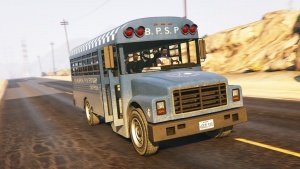 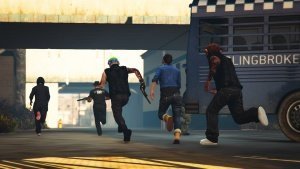 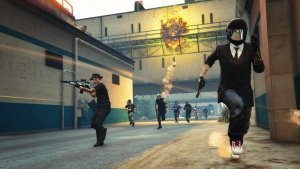 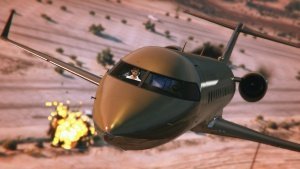 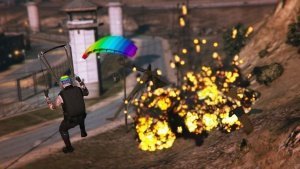 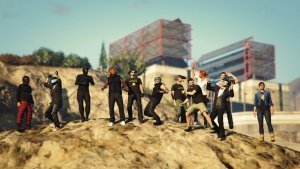 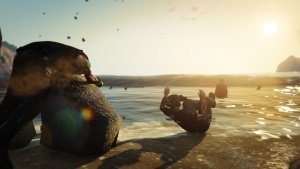 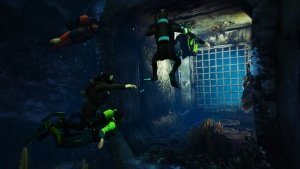 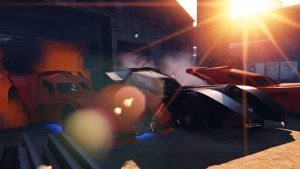 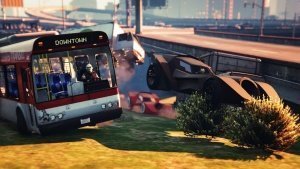 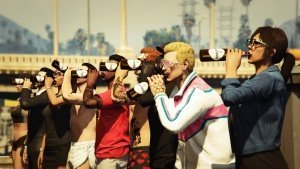 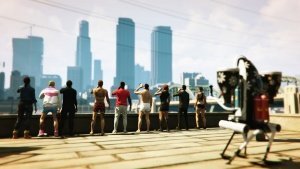