“It’s 106 miles to Chicago, we’ve got a full tank, half pack of cigarettes, it’s dark out, and we’re wearing sunglasses.” “Hit it.” The Blues Brothers are back on a mission from god, this time in Los Santos. They buy a Panto, an old decommissioned police car, and set off. However, as usual, they’ve managed to catch the police attention and soon enough all the units of LSPD are after them.

We’re once again back with a “cops n’ robbers” style freemode event, this time in Blues Brothers flavor. On Thursday, April 9, at usual 21:00CEST, put on a suit, a pork pie hat, straighten your tie and don’t forget the sunglasses. All black, of course. If possible, save an additional outfit that resembles cop uniform (SWAT, FIB, prison guard etc). After joining the session, organize yourself a Police Cruiser and meet others in the car park on the roof of Downtown Ammu-Nation (the one next to Simeon’s dealership). Also, don’t forget to thoroughly read the game rules beforehand. 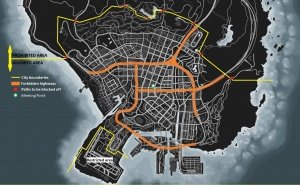 Let’s see if we can destroy more cars than in the movie. Also, big thanks to everyone who joined the planning process and promised to give their helping hand during the event. If you know some good blues music, then you can prepare to share it with others, using Rhythm bot on Discord.